I just watched this: It's very good - It reminded me a lot of Spirited away, interms of the story line/structure.

Has anybody else seen this? i think it was released (in Japan) summer, 2002

also on the same tape were some short animations, calles "ghiblies" 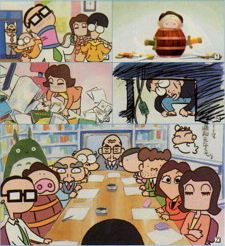 I think it's supposed to be based on people who work at the studio - it's little anecdotes and episodes of everyday life, like eating really spicy curry.

some are produced/directed/original story by Miyazaki before the Ghibli studion was established. Some are directed/produced/story by someone else in Ghibli. Some are TV series that Miyazaki worked on earlier in his career.

Ah, I can go on forever with the Ghibli films. If there is a heaven for me, it apparently exists in the head of Mr. Miyazaki. Hehe.

I'm not so big on The Cat Returns (by the way, this film wasn't directed by Miyazaki), but one of my favorite Ghibli films is also a non-Takahata/Miyazaki film called Whisper of the Heart, which is essentially the prequel to The Cat Returns. Whisper of the Heart is just such a sweet film, and it's one of the few Ghibli films that makes a comment on the fantasy worlds as opposed to being immersed in them. I watched this film with my Mom, and she was in tears for almost half of the film, saying how this was exactly what it was like when she was a young girl in Japan. Maybe it's also because of this viewing that I like this film so much. Also, it's so strange to note how John Denver has a had a profound effect on my life by being featured in the soundtrack of a Japanese animated film!

"Whisper of the Heart" is one of my favorite Studio Ghibli movies. Everything about it is really wonderful.. It's tremendously sad that the person who made it died shortly after.

"I Can Hear the Sea" similarly has moments where your heart is in your throat, just from the completely sincere nostalgic wonder (does that make any sense?), but it just doesn't go as far emotionally. Still really affecting..
Top

I liked The Cat Returns, but I think it's more that I thought it was fun, as opposed to thinking that it's GREAT - I felt that in a way, it seems as if this is the "sketch" for Spirited away - it's similar, like I said, in the story structure - (Although I believe Spirited Away was made before Cat Returns)


How the main character is sort of average and unsure of herself in the beginning, the alternate universe where she fights to keep her identity of who she is/where she comes from, and her transformation through her experiences. It seems like they both have a similar outline, but Spirited away gets more involved.

I saw "Whisper of the Heart" a while ago, so I can't remeber it too well anymore (better get a hold of it again) but I DO remember that the gentleman cat's the same one as the one in Cat Returns... which may sound "DUH" based on the title, but actually the Japanese Title, "Neko no Ongaeshi" means... well, it's hard to translate directly, but Ongaeshi is returning a favor or reciprocating good will - like how she saved the cat prince from getting hit by a car, so Ongaeshi is either being done by the Cat King (giving Haru gifts and try to make her a royalty - which from his eyes must be a show of appreciation) or the Cat Prince and Yuki (the white cat), who save Haru and free her from the cat King's show of "appreciation" and Neko, of course, is "cat"

I remember really liking "Only Yesterday". All these movies definately make me feel nostalgic.

I always wonder how non-japanese people perceive all the Japanese references, like in Spirited away, when Chihiro step on the curse worm, and they say "Engacho" and she point her fingers together and have that "cut" by someone.

"Engacho" means yucky or dirty, and the whole thing that they do is like a little superstition thing (for children), like knocking on wood. I saw a documentary about the making of Spirited Away, and Miyazaki was talking about how most people at the studio didn't know what "Engacho" was. That they were too young, and all these Childhood games were getting lost in the new generations.
Top
Post Reply
4 posts • Page 1 of 1

Users browsing this forum: No registered users and 10 guests