Hey, this is looking good! This is such a nitpick, but it stood out to me - in the panel with the azimuthal perspective the helicopter is tangent with the building behind it in two spots, and it's really flattening out that area and making it not read as well. The panel looks so good other than that, I think it'd be a relatively small fix to make it all read a lot better. Keep up the good work though, I can't wait to read it with words.

I keep a sketchblog here
Top

I love the pencils. This is very VERY strong and very detailed. Your line work is coming a long as well, but it would GREATLY be improved with a good amount of spot-blacks. Just a few strategic places to help make the image pop more.
Blog/Portfolio--- www.FireLightsMedia.com
My comics--- www.FunnyThingComic.com
Top

This comic is really looking good! You sure aren't making it easy for yourself.
Top

Very good of you to say, everyone. This is something of a departure for me from what I normally do. The big criticisms of previous attempts I've made at this is lack of detail, which is an embarassing thing for an architect to be accused of!

As to the spot blacks, -PookeyG-, I'm resisting that, actually - when I did that in some initial ink tests it looked too sharp, like the surface of the Moon. I could probably feather it with good brushwork (vide: Charles Burns), but as I'm still getting used to brushes it's a bit beyond me yet. I'm saving that technique for when I have a little more practice at comics under my belt. For this particular one, which is supposed to be a sort of neo-Film Noir, I'm using soft grey tones (cool greys) for shading and shadowing, to give the effect of a black-and-white movie (I hope). You actually inspired me to do page five full up in the greyscale I've planned out! I'll post it in a few days, when I'm done.

Come to think of it, though, I might still go for heavy blacks for the night scenes, where they'd play better. Revisit that later.

And Squirpy, you're right. I see what you mean - right between the chin turret and the ammo bin slung under the chopper. I'll tweak that for sure, now that you mention it. And I appreciate the nitpick - I'm trying to improve, after all!

I can't really call this "colored" since it's in black and white, but this is what the final proofs for his comic are going to look like. 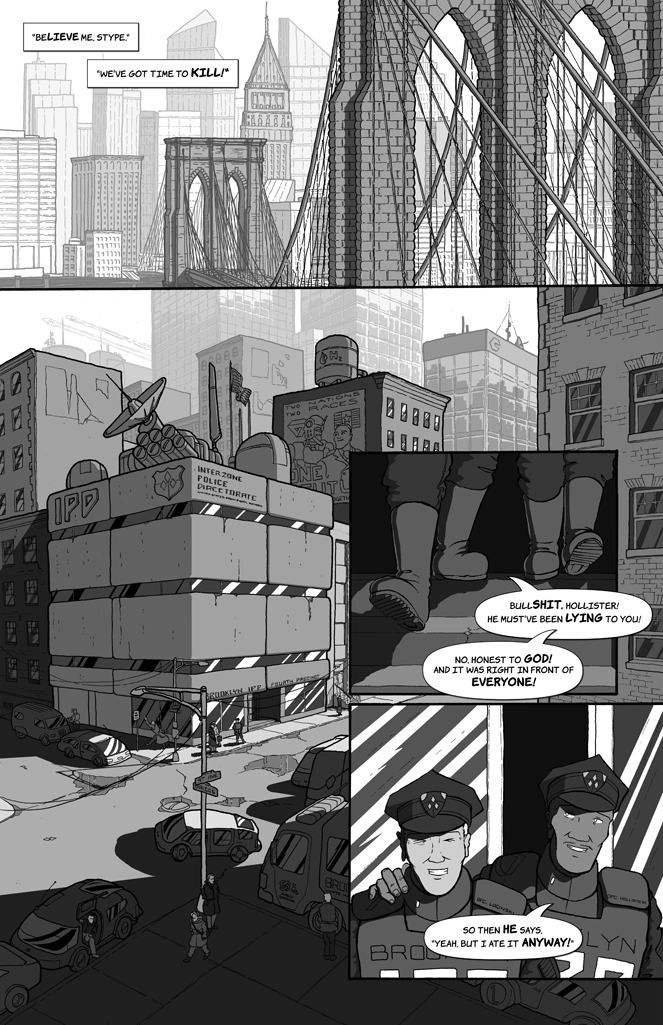 Also, any advice on posting updated drawings in a thread like this one here? That is, should I edit previous pictures as I color them? What's the proper/preferred posting method when it's a work in progress?

Wow, your "coloring" really gives it a lot of depth! Can't wait to see more.
www.joosthaakman.com

I couldn't agree more. Those grays make EVERYTHING better. It gives me a strong sense that it is early morning.

Very nice stuff. You've got a bit of a Moebius feel going on, which is great, with the detail and the stippling/linework. Nice stuff.
Marooned - A Space Opera in the Wrong Key!
http://www.maroonedcomic.com/
Top

Damn, beat to the comparison with Moebius, but I guess it doesn't hurt to second it. Heh, you are an architect and it shows in the beautiful and intricate... architecture... detail. I can't wait to see these colored. The story seems interesting, too. Overall, this is really professional work - are you aiming or do you have a publishing deal, if it isn't to straightforward to ask? It just seems like you should...

Wow. The comparison to Moebius is a serious compliment. Thank you! I mean, if I wored the rest of my career and ended up with half of his skill, I'd be happy!

As to publishing, I hope to get my stuff out there sometime. For now, I'm working on a minor web presence for myself, but after that! I've had a lot of work turned down outright so far, though. Part of the game, of course, and it improves you, etc. etc. blah blah blah. Truth is, with a 50-hour-a-week job already, it's a bit of a thing just getting as far as my drawing board at the end of the day!

Well keep it man, you're doing great. Perspective will probably be the death of me in comics, and I get frustrated when it takes me too long to get a scene looking right. I'm not really looking for a realistic approach in the stuff I'm doing, but I end up having to get it perfect just to satisfy myself, even though I want it to feel like there's energy and character in the buildings, if that makes sense.

I get tired just looking at your details, man. Dang!

Like others have said, well done on the attention to detail. Even without color, I love the b&w look and feel!
Top

I really like the start of this. It leads into the street scene with the robot putting his hat on really well. I think the line style is great and I can't wait to see some colour in there.
Peter Kneeshaw

Users browsing this forum: No registered users and 35 guests