The professor gave us vague character descriptions and we had to design a creature based on how we imagined this vaguely described character.

Here are a couple of my later sketches, fairly close to what the final character ended up looking like (I haven't scanned any of my sloppy early sketches yet....) A couple of color studies, working from my sketches. I was trying to decide if I should color him digitally or with acrylics.... 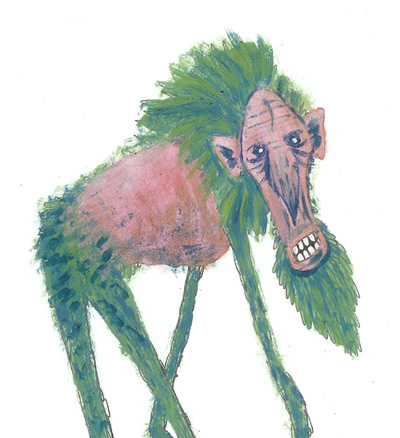 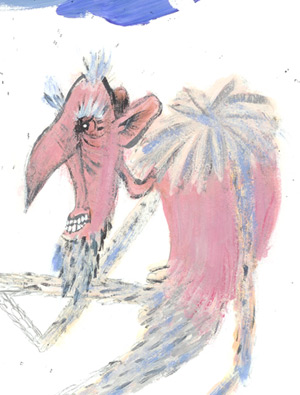 At this point we were asked to make models of our creatures out of modeling clay. I built an armature skeleton out of copper wires.

Now, using my model as reference, I'm working on some final color renderings of my character. I've been painting him digitally in photoshop.

After spring break, we'll be using the characters to storyboard short scenes.
Phil in the Blanks
Top

Oh, that's rad. That's one rad yeti-type thing. I'm especially intrigued about the clay sculpture part of the process; it's something I would personally have thought tedious and unnecessary, but now that I think about it, it probably come in handy for keeping your regular characters proportionally accurate.

The way the last picture is made with digital colors on a model is very cool! Nice drawings also, they remind me of the friendly gigant form the Roald Dahl story.

Blom wrote:The way the last picture is made with digital colors on a model is very cool! Nice drawings also, they remind me of the friendly gigant form the Roald Dahl story.

Actually, it's just a painting of the model, not digital colors on the actual model! The model was just used as a reference.

Thanks for the kind words, guys!
Phil in the Blanks
Top

Very creative and inspiring work. Love the model and design.
My Portfolio!
My BLOG!
Romain
Top

Thanks guys!
Phil in the Blanks
Top

wow. this looks really cool phil. good job. (sorry it took so long to reply to this)
I shaved my neckbeard for this?!!
http://TedtheTerrible.com
Top

Really cool. Personaly it's much more interesting to me the use of
an actual model that you have sculpted that has been combined with digital touches than a 3D program developed image. It sort of blurs the lines between the real and fantasy.
Top

I saw these on your livejournal! These are great!

Users browsing this forum: No registered users and 18 guests