The crazyness continues... 2007 was a mad year. I jumped project twice...two things were put on hold (but had had huge amounts of work on them). Those two things were "Errans Alba" and "Servus". "Errans Alba" had knocked the stuffing out of me and once the screening was over I had a brief rest and round about May / June time I started to work a lot on what was is be my 6th film "Servus"...that work went on all the way up to December 2007 and a four minutes have been made.

On the 20th of December 2007 however I jumped again (by accident) to start up work on a my 7th animation.

I had been looking at a whole bunch of stuff in the topic at the top of the animwatch forum (the Film Discussion section) (which is a great section in fact the entire forum is / was great), I saw the new Wall-E trailer and then I saw the stuff from Studio AKA (which I was seriously impressed by) I sat there thinking “holy crap, these characters are so very basic and yet extremely extremely nice and stylised”. I was very taken by it and well instantly influenced to start up a new file in Cinema 4D.

I created a character which I hope is not a rip off of Marc Crastes characters (I don’t think it is, but like I say its very influenced by what I saw)

I basically went back to the roots that they teach you and push you to do (rightly so) at college on doing a walk cycle. Its something that I seem to avoid (don’t know why because I enjoyed doing this one)

I got very much onto a roll and here are some stills from three of the six shots of forty seconds of finished animation. 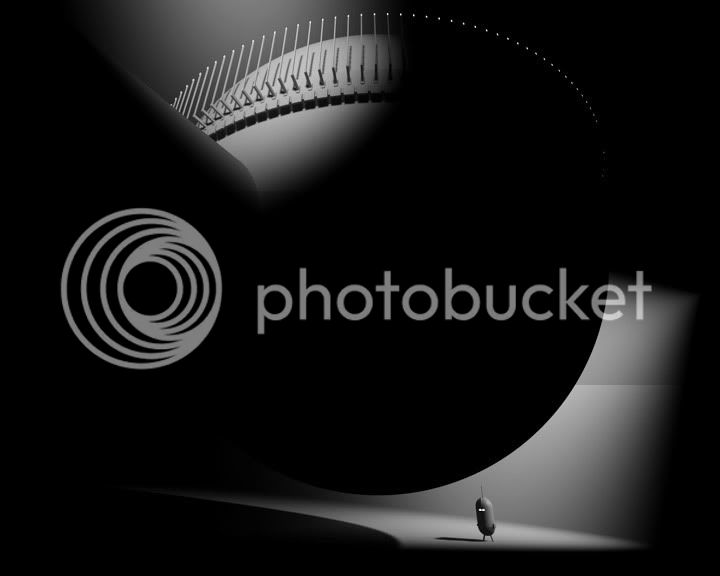 Hey Michael. These shots look VERY good!
I did think right away of jojo and the stars though... Studio AKA is by far my favorite commercial animation studio, and I love their work.
Still, your composition and your style is different. What made it look likethat was, obviously, the Black and white, and the way you use your light.

I like these images a lot, and I'd love to see your motion tests. Would there be a way for you to post them here, or would you rather not show them before you're done with your short?
Also, one thing about Studio AKA is their style of animation. I haven't seen yours, but chances are that as soon as people see this moving, the comparison will stop.


In any case, this is great, and I want to see more.
www.pascalcampion.com
http://pascalcampion.blogspot.com/
Top

This is cool! Like campy22 say, my first thought also went to jojo.
Using Digital 3D is in B&W is great, it makes it more heavy, and create a different world. Looking forward to see more of this!

Really glad you love this...yep I’m just wondering how this new image is going to be taken.

I have been a bit worried that its too much like studio aka...but...It’s maybe different enough for me to be ok, I'm not sure...but…there is probably a whole line of characters by lots of different artists that are long cylindrical things with peg legs that have been done across the decades.

I’ll definitely do that yes, but I’d like the sound to be on it, there’s no foley at the moment and this the first big foley outing for me...when the house I live in is nice and quiet (or I might go out the garage with the brass table) I can record, I’ve got some ideas with a brass table we have (it makes some nice sounds))

Yeah, these are looking FINE, Michael. I know what you mean about being afraid to be mistaken for StudioAKA, but I don't see a problem with exploring your influences a bit. I'm sure by the time you're done, you'll diverge from the path a bit and find your own unique style.

Meanwhile, I'm really enjoying these images. Keep it up!

Yeah it’s one of these things where I’m thinking “is this TOO similar” and “well...Craste must have been influenced by something like this too...he MUST have been.” and “oh god...have I just ripped off one of thee most respected filmmakers out there???”

At any rate, there are things that are different about this...I shoot in 1.25:1 and Jo Jo seems to be in 2.01:1 (that is of course he may be cropping like they do with Super 35mm (but he may not have done that)) Ever since I started to pay a bit more attention to some of Stanley Kubricks films and some other films (Citizen Kane, Metropolis) I wanted to to shoot in the ratio that was close to where they were at with their ratio. I noticed that Kubrick could get a tremendous sense of open space and height with large interior locations.

There is something also extra special about sitting in a cinema with a screen that is 1.33:1 or 1.25:1. Of course its probably a decision that’s going to cause endless amounts of hassle as a lot of things are 16:9 and 2.35:1 but I know in my heart that it’s the right thing to do.

My main character also has eyes with pupils and my animation has no textures.

I thought I would go wider on this shot (same shot) so went from a 25mm to a 21mm to get more space (more ground in).

I think you piece looks great. I wouldn't worry about things being similar to Jo Jo or Madame Picas. Because your story is your story not Marc Craste's. His work like everyones draws from other sources I can see a lot of Brothers Quay and Eastern European Animation in his work. Just remember people won't have a go at you for having a similar style only in your story content is the same.

Thank you, I’m really glad you like the images. And glad that people seem to be ok about the characters.

I think that’s very true about the story...but I think that I worry that I’ll lose respect that its too similar in style, BUT, I think that I’m going to have to work on trying to train my mind into a way of thinking that we are all influenced by others stuff, there’s a huge 20s influence going on here with me and Craste I think, though I would like to see Craste work in 1.25:1

I do find it hard though and I feel like I’m doing something that is not right.

I dont know anything about Brothers Quay and Eastern European Animation but would love to see that very much. I dont know much about the history of expressionist animation...I think maybe if I did then i might feel better...lol.

I want to really have a good lot of varied shots, wide, medium, close, and even now I’m trying very hard to snap out of my infamous large number of sweeping shots that inundated my old films.

I can already see these guys moving... fun!

Well you do realise that I’m infamous for changing my mind?, it gets me into all sorts of trouble, I’m wanting to and have been looking at Errans Ruber again, with a view to re direct that...lol…(there’s just not enough hours in the day) (or life)

BUT, this constantly moving camera (fairly fast that is) has to stop in my films I think. And its forcing me to do more movement in the frame. I can say though that you will be getting long takes in this.

The thing is that when you start to re direct your own animation, you start thinking “uh oh, am I making this a lot worse, I like this and THAT from both lots of cinematography and so do the viewers”
Michael J. Dowswell
Independent Animator/Director

Short and long is good. Goes to rhythm. It can't all be long slow shots, and it can't be all short and frenetic.

Variety is the spice of something or other.

Well that’s exactly right Steve, I don’t know if you saw the new clip of Servus way back, but I had started to add a bunch of short shots (short bunch of shots for the interior of the transport ship sort of a like a short sequence in-between two long sequence)

This scene may or may not change, I'm not sure on the design of the enviorment for this, if I can get it better then its going to change.

Users browsing this forum: No registered users and 32 guests