Casshern...Anyone know anything about this?

Casshern...Anyone know anything about this?

heh. I actually just posted exactly the same thing on another message board..."Anyone seen or know anything about this?"

I know it looks like a lot of fun, ats fer schuer!!

The eye candy is certainly tasty, now if I could understand what they were saying.
Top

I love the shot of the huge robot being chopped in half.

That made me smile.

"I am at two with nature." --Woody Allen
Top

Looks pretty interesting. The visuals are certainly nice to look at, and the editing for the trailer is pretty good. This film looks like a concept artist's wet dream! Hehe. They even have the Final Fantasy androgynous glam rock thing going here...

Looks pretty, but that's about it. I see they felt the need to include The Cheesy Romance Subplot(TM) and The Final Showdown With Large Swords (patent pending).
keaner.net
the secret friend society
Top

Man....CASSHAN: ROBOT HUNTER got all gritty! 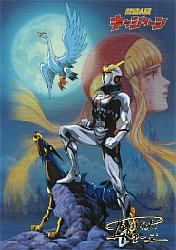 Looks like he lost his womanly child bearing hips too...rowr!!

my friend told me that the plot is something like: robots are made to kill anything that is harmful to the environment, so naturally, they start killing all the humans--so naturally, its all up to casshern(i guess thats his name?) to kill em all...but dont take my word for it *reading rainbow tune*
Top

That trailer is so cool. I wish I could understand it, though. The city itself sort of reminds me of the anime movie Metropolis, and the robots look sort of like bipedal versions of the Matrix sentinels to me. Whoever the main character is, he's got some pretty strong hand bones... I mean, wow, he done gone a chopped a robot in half.
c l a a a n k d o t c o m ! ! ! !
Top

Casshan or however you want to spell it ... was a 1970s anime series ...
Loved it to no end when I was a kid ...
The scientist who created the robots, understands he has doomed the human race by doing so ... so he transforms his son into a solar powered humanoid to destroy the robots and save the human kind ...
The new robots society was very much fascist and nazist looking from what I rememeber ...
The robot design was really cool and campy ...
It was remade a few year back (the images that Joel posted are from that ... except for the big image, that looks like fan art ...).

This live action incarnation seems quite interesting ... could be mighty
bad too, but I am very curious ...

When is this coming out

This is mad crazy. Does anyone know if it might be out on dvd at a con

I have to bring this back home... now that's an idea

I saw this movie last night...I think I nearly wet myself with some of the initial combat scenes. The movie is simply gorgeous...reminiscent of Sky Captian, but if I dare say, Casshern has a bit more style. Regardless, though the story might slack and get a little muddled towards the ending, it's a pretty fun ride.
Top

Damn! how? where? Dvd or big screen?
Jealously is setting in slowly.

Users browsing this forum: No registered users and 8 guests