okay. I need to talk about the Brothers Quay. I think they are amazing and I admire them on so many levels. I'm sure a lot of you know their amazing stop-motion animation such as "Street of Crocodiles", "Rehearsals for extinct anatomies", "The Cabinet of Jan Svankmajer" etc...

Has anyone seen "Institute Benjamenta"? It is one of my most favorite film, it is just so breathtakingly incredible and inspirational

It is live-action. (with some animation)

I can't believe how beautifully each shot is composed, amazing camera work, magical/surreal sets and situations, I mean, they really capture some sort of a dream, and put it on the screen...

They are also my heroes, not only for creating one-of-a-kind film and animation that is pretty much in their own genre, but for SUCCEEDING.

They are "Europeans by choice", as they say, where there is more appreciation and support/funding for art-films and animation. They create their animations almost purely on their own, with meticulous attention to detail. I mean, can you imagine? Two gaunt identical twins, living in a small castle in England, punching out amazing dreams/nightmares that makes the whole world's jaw drop?

Well, I can't even articulate myself, I always get so excited about them. I just wanted to start a thread.
Top

Cool stuff, Miwa. I've been meaning to take a look at their work, especially after seeing Jan Svankmajer's Dimensions of Dialogue . (I looove that film)

Thanks for the head's up!

I love these guys also. Institute Benjamenta is something that I've really wanted to see, but the only video store that I know that carries it always has it rented out...

I have the Quay's short film collection on DVD, and there was a time when I kept trying to watch the entire thing before going to bed -- I would put the DVD on every night, and it would always lull me to sleep before I got to the end of the disc. But let me tell you, I had some real interesting dreams while I was sleeping. I had to watch the disc in increments so that my mind wouldn't keep rebelling against me.

And I would just like to say that porcelain baby dolls really creep me out. The Brothers Quay take them to the next level of creepiness.
keaner.net
the secret friend society
Top

gosh, too bad you guys are far away, otherwise i'd lend it to you in a hot second.

i guess it's probably something that you're really "lucky" if a video store or your local library happens to have it.

if you're in California - I know one place that has it - www.greencine.com -
i don't know if this is a valid suggestion - it's like netFlix, it's based in SF, and I think the first ten days are a free trial - (It looks available right now)

so i guess it might be kinda cheati... taking advantage of their offer, but ten days should be enough to rent then send back the DVDs. I do greencine, and It's been working out for me in the most part. I think they have a pretty big selection of foregn and less distributed films.

The probelm that i have with them is 1) the art films are there, but sometimes they're in high demand and takes a LONG time to get them.
2) in someways, I don't like movies enough to be a member.

I like movies, but I'm not a movie buff.

Kean - Yeah, I know - sometimes art films make me sleepy, too. I mean, they're not Indiana Jones.

They're often incomprehensible and non-narrative.

Here's one that I like that's almost unbareable, but AMAZING!
"Last Year in Marienbad" - Alain Resnais 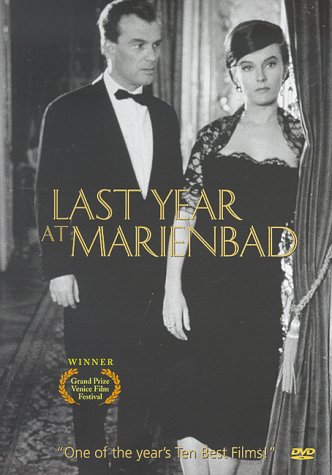 The story doesn't go anywhere! - but that's because the narrative is a loop and a labyrinth in itself.

Kazu - I also like Jan Svankmajer, although not as much as Brothers Quay. (Sveankmajer was sort of a mentor to the Quays)

I like his shorts, and I like moments in his full feature works. (i.e. Alice, Faust, Little Otik) I think he's very creative and imaginative and funny, but the longer works lack something that holds it together - where as the Quays use the soundtrack very effectively keep everything knit together and moving forward.

But i DO think that Svankmajer is brilliant.

Users browsing this forum: No registered users and 6 guests