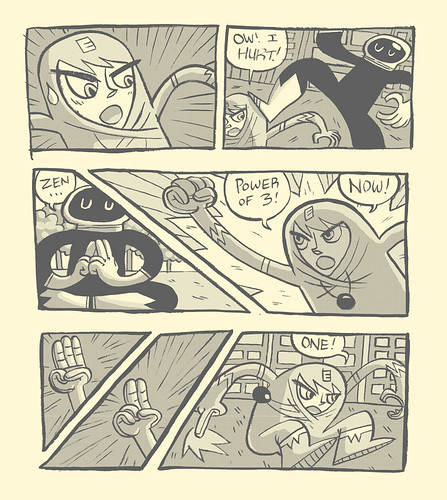 I did this comic as a background for a magazine illustration. I ended up liking the comic a little more than the complete illustration (plus it wasn't my normal style and I'm not prepared to switch my style in that direction.)

Of course that interpretation might have just been my liberal arts education getting a little carried away and all that is happening is two Japanese like superheros battling each other to the death. Either way is cool with me.
Top

You nailed it!
Mike Laughead

No offense, but with the last name of Laughead, were you doomed to become a cartoonist?

I love your comic here and the others on the site. You have a lot of talent. Keep up the great work!
Top

This was just an interior illustration. What they finally wanted wasn't something that would go in my portfolio so I just kept the part that I liked, the comic.
Mike Laughead

I second willmj. I like your stuff a lot. And Pelota is really cool too.

Users browsing this forum: No registered users and 34 guests